Posted on August 8, 2016 by ashridgevolunteersblog 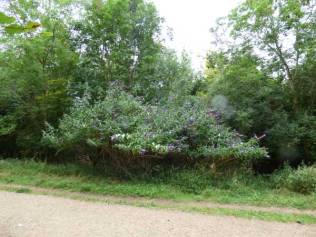 After a six minute walk from the V. C. along the Old Copse Trail around Meadleys meadow behind the cafe, you will find a Buddleia bush. I was walking past it last Wednesday and spotted a butterfly that I have not seen since my Dorset youth which, believe me, is a long time ago. It was the greenish form of the Silver-washed Fritillary. This is a large woodland butterfly which is usually brown with black spots, but there is a much rarer form of the female in which the bright brown background is replaced by a dull greenish colour. Stupidly I had left my camera at home, but I returned on three occasions until I had got some half-decent shots. At any one time there were up to eight individuals of the usual brown form on the bush, but I am pretty sure that there is just one specimen of the greenish form lurking around – and it is rather shy. It is quite special to see so many of this species in one place and is possible only because of the unusual woodland location of this Buddleia specimen. Other species seen on the same bush were Peacock, Red Admiral, Comma, Large White, Small White, Green-veined White, Brimstone, Gatekeeper, Ringlet, Holly Blue and Large Skipper. My being there taking photos drew the attention of passers by to the butterflies and the resulting conversations were great, e.g. “Wow! I didn’t know there were that many species”; “I think you’ve got my son hooked”; “Thanks, this has become the most interesting walk we’ve had in ages”. The bush may not belong there but it is a real sensation and certainly earns its keep!

Rikki undertakes the butterfly surveys for the Trust at Ashridge, tends the garden at the V C (along with his wife), and is a representative on the Estate Committee at Ivinghoe Aston.

3 Responses to The Butterfly Bush