Posted on November 19, 2017 by ashridgevolunteersblog 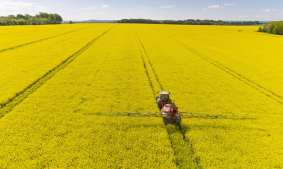 Friday the 10th of November was a good day for bees, living in the U K. There was good news for the hundreds of thousands of people who had been calling on the government to endorse a ban on neonicotinoids, the main culprit for the precipitous decline in the world’s bee population. Michael Gove, the responsible government minister, has finally confirmed that the UK will support an extended E U ban against the use of these pesticides. It has been a long time coming – and has taken years of effort from campaigners all over the UK. Make no mistake: this ban will do much to limit the damage done by these dangerous chemicals. Some issues are above party politics and this is one of them – previously the Government had opposed the legislation.
The UK will back a total ban on insect-harming pesticides in fields across Europe – there are three arable farms on the Ashridge Estate. The decision reverses the government’s previous position and is justified by recent new evidence showing neonicotinoids have contaminated the whole landscape and cause damage to colonies of bees. It also follows the revelation that 75% of all flying insects have disappeared in Germany and probably much further afield, a discovery which Mr Gove said had shocked him.
These pesticides when incorporated into the soil or coated on seeds may kill soil-dwelling insects, including the bees that are exposed to the leaves, fruit, pollen or nectar of the treated plants.
Neonicotinoids are the world’s most widely used insecticide but in 2013 the European Union banned their use on flowering crops, although the UK was among the nations opposing the ban. The European commission now wants a total ban on their use outside of greenhouses, with a vote expected in December, and the UK’s new position makes it very likely to pass.
“The weight of evidence now shows the risks neonicotinoids pose to our environment, particularly to the bees and other pollinators which play such a key part in our £100bn food industry, is greater than previously understood,” said Mr Gove. “I believe this justifies further restrictions on their use. We cannot afford to put our pollinator populations at risk.” Mr Gove said: “As is always the case, a deteriorating environment is ultimately bad economic news as well.” He said pollinators boost the yield and quality of UK crops by £400m-£680m every year and said, for example, gala apple growers are now having to spend £5.7m a year to replace the work of lost natural pollinators.
Michael Gove is to be congratulated for listening to the experts on this issue and backing tougher restrictions,” said Friends of the Earth’s chief executive Craig Bennett. “But lessons also need to be learned – we now need to move away from chemical-intensive farming and instead boost support for less damaging ways of tackling persistent weeds and pests.
“We warmly welcome the UK’s change of position,” said Matt Shardlow, at insect conservation group Buglife. “Brexit will give the UK more control over the health of our ecosystems and it is essential in doing so that we apply the highest standards of care.”
Honey from across the world is contaminated with potent pesticides new research shows, clearly revealing the global exposure of vital pollinators for the first time. Almost two hundred samples of honey were analysed for neonicotinoid insecticides and 75% contained the chemicals, with most contaminated with multiple types. Bees range over many miles to collect nectar and pollen, making the honey they produce an excellent indicator of the pesticide pollution across their local landscape.
Bees and other pollinators are vital to three-quarters of the world’s food crops but have been in serious decline in recent decades. The new analysis joins a growing number of highly critical reports on pesticides, including research showing that most farmers could slash their pesticide use without losses, a UN report that denounced the “myth”that pesticides are necessary to feed the world, and a UK chief government scientist stating that the assumption by regulators that it is safe to use pesticides on industrial scales across the landscape is false.
John Lewis- Stempel the award winning author in his book The Running Hare, provides the human aspect. “If the chemicals dousing the land are so fantastically safe why do crop-sprayers have sealed cabs with an air filtration system? If pesticides are dangerous to farmers, they are dangerous”. Just a thought!

Thanks to Damian Carrington for his contribution.