The Ashridge dovecote on Stocks Road in Aldbury, will be open to the public on Sunday 10th July and 14th August from 2.00pm to 5.30pm. Entrance is free and no booking is required. 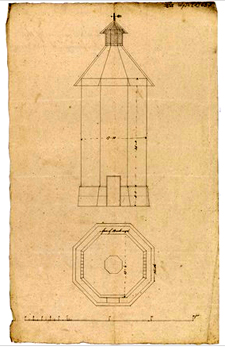 The Ashridge estate had it’s own dovecote in the 19C to provide the large mansion with a delicacy for it’s many grand dinners. The building, now part of Gade House in Little Gaddesden was originally part of Home Farm, which was the agricultural headquarters for the estate, at that time. The impressive building built around 1820 in the style of the early 18C, was probably by Jeffery Wyatt as an antiquarian exercise.

The 7th Earl of Bridgewater (1803 – 1823) added many extra features to the estate after completion of the new Mansion in 1814. The dovecote was built in red brick in Flemish bond with some blue headers, and York stone with tooled margins at the base. The walls of the octagonal tower rose shear to corbelled eaves some twenty five feet in height and eighteen feet across! Perhaps a frivolous exercise, but money was no object in those days whenexpensive artefacts were created to impress the visitors.

Added by a Volunteer Ranger

2 Responses to The Ashridge Dovecote