Posted on September 1, 2019 by ashridgevolunteersblog 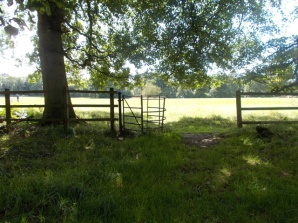 The dramatic destruction of the Amazon rainforest is a stark reminder of the importance of trees in our ecosystem – they give us life taking in carbon dioxide and giving out oxygen.
Ashridge has some two thousand five hundred acres of of woodland, some are ancient woods and others more recent where trees have colonised the open commons, and most of the older trees have been recorded. Some seven years ago the volunteers set about mapping the Estate and recording some three thousand three hundred trees for the Woodland Trust – the ancienttreeregister. The 100,000 th tree on the ATI was recorded by Kevin Neighbour and Steve Waters – a veteran beech boundary marker in Old Copse measuring just under six metres at grid reference SP 97691187. So it’s been around for well over two hundred years. There are three categories in the register covering the age of a tree measured by the girth – notable, veteran, and ancient. The Trust have been actively promoting the veteran trees on the Estate by “halo” pruning – taking out competitive trees – to enable them to achieve ancient status at four hundred years. The older the tree the more species of invertebrates it can support.

Some trees were overlooked on the original survey and have since been located and recorded. Recently an “ancient” coppiced tree popped up – the unprepossessing hawthorn standing solitary in the middle of Meadleys meadow, last coppiced over one hundred years ago. The remnant of a hedge which once divided the field in two, along with a metal fence and an adjacent ancient footpath crossing the hay meadow – the original metal kissing gate still stands at the entrance. The tree has witnessed over four hundred harvests and hundreds of passers-by travelling from the hamlet of Ringshall to Aldbury for supplies, pleasure at the pub, and penance at the church. Overlooked for decades the Trust has now given the lonesome tree the respect it deserves by erecting a protective fence – it is a point of interest – coppiced and used over the centuries.

A fantastic tree for wildlife that can support more than three hundred species of insect. Its flowers are eaten by dormice and provide nectar and pollen for bees and other pollinating insects. The haws are rich in antioxidants and are eaten by migrating birds such as redwings.
Long live Crataegus monogyna.